Swan Lake, the very famous and much loved ballet did not start that way, despite its initial failure, in the 1870s and, 1880s, it is now one of the most popular ballets of all time. Ballet Met present: Swan Lake at the Ohio Theatre in Columbus on Sunday, April 30th, 2023. Originally composed by the famous Russian composer Pyotr Ilyich Tchaikovsky in 1875–76. There is no known idea of where the idea for the plot came from, or no way has been found to prove who wrote the original libretto. Initially in two acts, the scenario was fashioned from Russian and German folk tales and tells the love story of Odette, a princess falling victim to an evil curse, from the sorcerer Rothbart. The cure turns Odette into a swan by day, and by night she reverts to human form. Worldwide, the love story varies a little, but the biggest difference in the productions, is in the ending. It was originally written and intended as a tragedy, but many producers change the endings, and now it is more often altered into a happy ending. 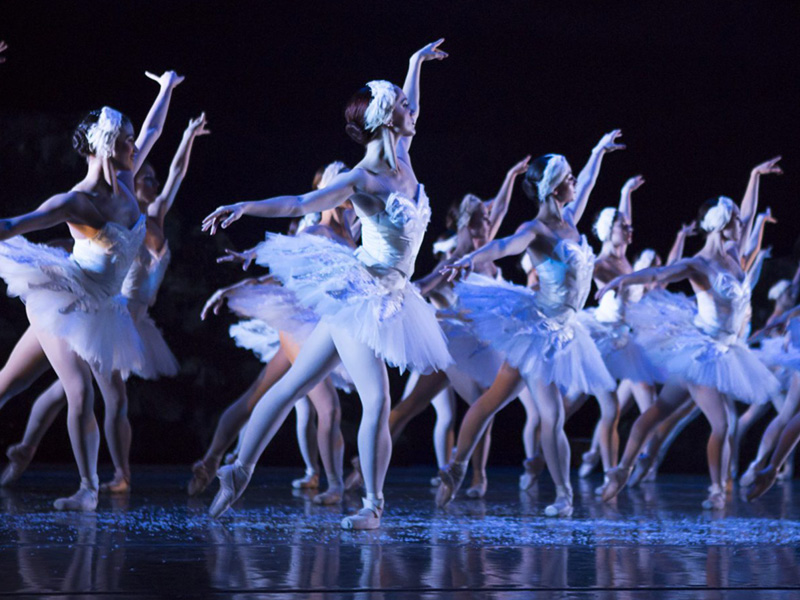 Prince Siegfried is celebrating his birthday in the palace, when the revelries are interrupted by the Queen, Siegfried's mother. She is overly concerned about her son's carefree lifestyle, and orders him to choose a bride at the forthcoming royal ball the following evening. Siegfried is understandably upset, that he cannot marry for love. As evening falls, Benno, Siegfried's’ friend, tries to lift Siegfried’s mood, and suggests they go hunting, after seeing a flock of swans fly overhead. Siegfried and his friends take their crossbows and set off to hunt the swans. Siegfried has become separated from his friends at the lakeside, and just as the flock of swans land on the water, he takes aims with his crossbow. However, he freezes when one of the swans transforms into the beautiful maiden, Odette. She is initially taken-a-back by Siegfried, until he assures of his not harming her. She explains that she and her companions have been cursed by the evil sorcerer Rothbart. By day, they become swans and at night, by the side of the enchanted lake – created by Odette’s mother’s tears – they return to their human form. The spell can only be broken if one who has never loved before swears to love Odette forever.

Siegfried threatens Rothbart when he suddenly appears in their midst. But Odette is quick to intervene – if Rothbart dies before the spell is broken, the spell can never be broken. Rothbart disappears as quickly as he appeared, and the swan maidens fill the clearing. Siegfried spends the night assuring Odette of his feelings for her, but as dawn arrives, the spell draws Odette and her companions back to the lake and back into swans. That evening, at the ball, the guests start to arrive for the costume ball. Six princesses are presented as candidates for marriage, to the prince. Rothbart, with his daughter Odile, in disguise, also arrive, but Odile is made to look like Odette. The other princesses try all evening to attract the prince, but Siegfried has eyes only for the false Odette. Odette tries to warn Siegfried of the deception from the castle window, but he does not see her. Siegfried announces to all, that he will marry Odile. Cunningly, Rothbart seals the trap and shows Siegfried the magical vision of Odette.

Grief-stricken and realizing his mistake, Siegfried runs to the lake. But at the lakeside, Odette is distraught, and the swan-maidens try to comfort her. Siegfried arrives to make a passionate plea for an apology. Odette forgives him, but his betrayal cannot undo the curse. Rather than remain a swan forever, Odette chooses to die, and to be with her always, Siegfried chooses also to die, and together, they leap into the lake. This act of love breaks Rothbart's spell and causes his loss of power, and his death. The swans, now transformed back into regular maidens, and watch as Siegfried and Odette ascend into the Heavens together.