Master of stand-up comedy, King of Queens (and Twitter, and geeks) and sought-after actor Patton Oswalt comes to Ohio Theatre – Columbus on Sunday 28th April 2019! Bringing a hilarious new routine on the road, Oswalt's riotously funny take on current events and every day observances, littered with pop culture references, will have you rolling in the aisles! Warm up those chuckle-muscles, guys! 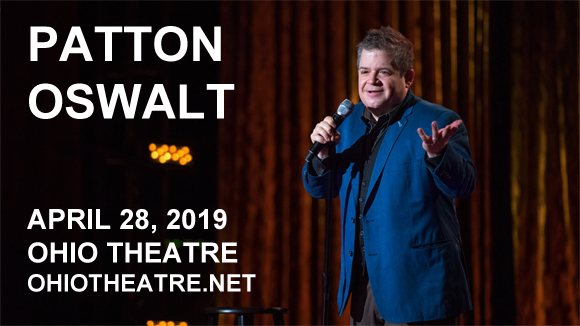 Patton Oswalt is an American stand-up comedian, actor, voice actor and writer whose career started in 1988 when he began performing on his local comedy circuit. His first break came writing for MADtv in the early '90s, and in 1996 HBO gave Oswalt his first comedy special. After making his TV debut in 1994 on an episode of Seinfeld, he made his film debut in the military comedy film Down Periscope (1996) and in 1998 he was cast in his longest and most notable television role as Spence Olchin in King of Queens – a role he played until 2007. 2007 also saw Oswalt in his first starring film role as the voice of Remy the Rat in the Pixar film Ratatouille. He co-starred alongside Charlize Theron in the 2011 film Young Adult, and went on to play multiple identical brothers, the Koenigs, on the Marvel television program Agents of S.H.I.E.L.D. Oswalt has released six comedy specials to date, and is the winner of a Primetime Emmy Award for Outstanding Writing for a Variety Special and a Grammy Award for Best Comedy Album for his Netflix special Patton Oswalt: Talking for Clapping (2016). Currently, Oswalt narrates the sitcom The Goldbergs(2013–present) as the adult Adam F. Goldberg, stars in the 2017 revival of Mystery Science Theater 3000, voices the title character in the crime comedy series Happy! (2017–present) and co-stars as Principal Ralph Durbin on A.P. Bio (2018–present).